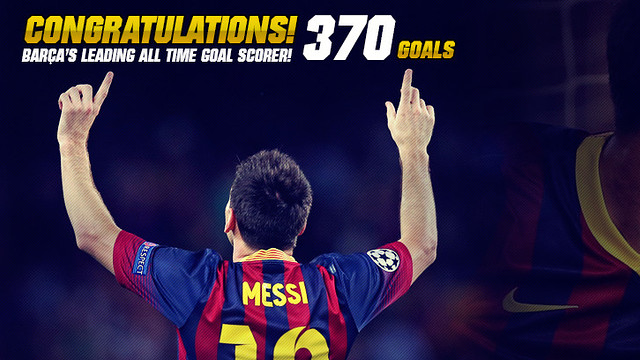 FC Barcelona’s No.10 breaks Alcántara’s longstanding record of 369 goals thanks to his hat-trick against Osasuna this afternoon

No one can stop Leo Messi. The Argentinian forward smashed the longstanding record of 369 goals for FC Barcelona that Paulino Alcántara held for 80 years. Barça’s Filipino legend played for the Club from 1912 to 1927, with a hiatus of two seasons in that time, and he scored a total of 142 goals in official matches and 227 goals in friendlies.

With his hat-trick against Osasuna at the Camp Nou, Leo Messi took his goal tally for Barça to 371 and thus broke Paulino’s 369-goal record. The Argentinian, however, has scored 344 goals in official matches and 27 in friendlies.

It seems unbelievable, but the Argentinian has scored 21 hat-tricks, four ‘pokers’ (four goals in one match) and on one occasion he scored five goals in a single game.

Against Osasuna, one of his favorite victims, Messi has scored a total of 17 goals in the league, the same amount he’s scored against Atlético Madrid. He’s also netted twice against the Navarre team in the Cup.