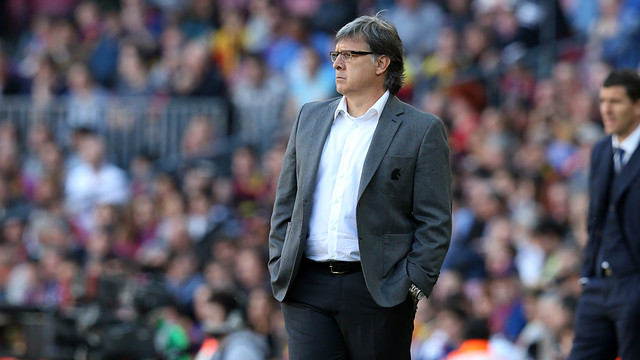 “These moments of football need to be reaffirmed by consistency in form,” says Martino

In the post-match press conference after the game against Osasuna Gerardo Martino said that his team “are on form” in the “crucial” part of the season. The FC Barcelona manager added that he “has no doubt” on how Barça should play at the Bernabéu next Sunday and that “today’s performance doesn’t change of mind in regards to who will play in Madrid.”

This week, with the Champions League and La Liga matches, the Camp Nou witnessed its team out in two fantastic performances. “We played two good games, we played well, we were serious. Our first game was tougher at times because we played against City,” said Martino, who declared that “we can’t be carried away by today’s game. Sometimes we lose points against teams that don’t have as much money as us, but what we did do today is what we should always do: win and play well.”

The Argentinian went on to say that his team “only did what everyone expected of us.”

Fight to the end

“Moments like these need to be reaffirmed by consistency in form,” said Martino. He added that Barça, who are four points behind Madrid and one behind Atlético, “will fight to the end.”

Finally, he noted that his objective “is to do the best possible job with a star-studded team” and that “it’s not easy to manage given the amount of big-name players, but it is easier thanks to the people I work with.”