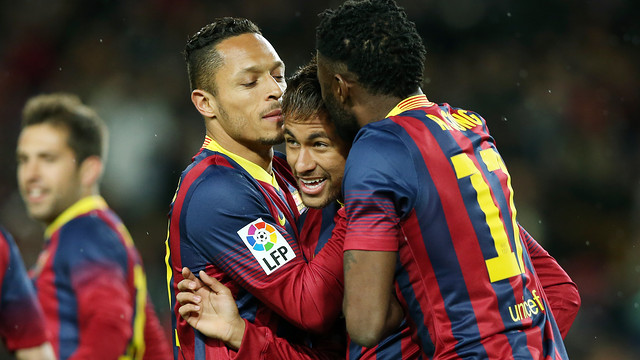 Barça see off Celta with 2 goals from Neymar and another from Messi, but Valdes’ injury casts a pall over the win

After a lightning start to the game as Barça took up from where they left off at the Bernabeu,  a nasty looking injury to Valdes stunned the Camp Nou and although Messi and Neymar ensured the win, the keeper’s injury cast a pall over the celebrations.

Luis Enrique made his return to the Camp Nou with a five-man defence that included Fontas as a deep lying midfielder and with an untypical tactic of ceding possession, which allowed Barça to lay siege to the Celta area and reap the benefits within the first five minutes, as a clever move between Iniesta, Messi and Alexis ended with a simple tap in for Neymar.

With Iniesta finding plenty of space through the middle to release Messi, Barça were playing elegant and incisive football which created chances for both Neymar and Messi.

All the optimism took a blow on 20 minutes however, when Valdes fell awkwardly saving a free kick and immediately called for help in obvious pain, before being stretchered off. The Barça players looked shocked for a while and the rhythm dropped, before Iniesta and Messi brought a smile back to the fans’ faces on the half hour with an inch perfect move that the Argentinean finished off by rounding the keeper to double the lead.

Iniesta was replaced by Sergi Roberto as a precaution at half time and with the rain coming down and the players clearly affected by the injury to Valdes, Celta took the chance to step forward after the break and Pinto was called on to make a superb double save on 52 minutes to keep the Galicians out.

Cesc was unlucky to have a goal ruled out for offside just before the hour mark, but it was the visitors who looked the more likely to score, until on 67 minutes, Neymar broke down the left into the box and fired through the defenders’ legs to beat the keeper and make it three. Soon after, the Brazilian was replaced by Pedro.

There was still time for drama though, as Pinto clattered into a post after a good stop from Bermejo. The crowd held their breath, but the keeper got up and went on to make two more good stops on a night that brought another win, but one tinged wth sadness for Valdes’ injury.