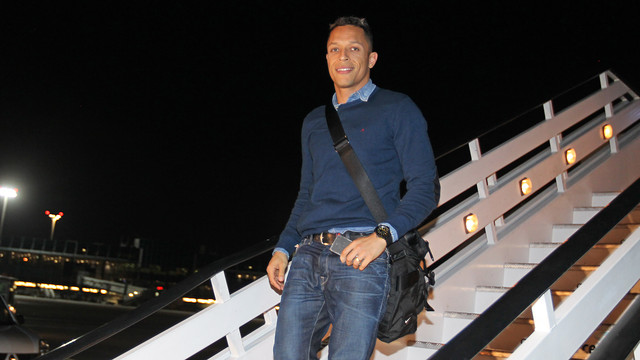 The FC Barcelona expedition arrived in the Spanish city at 8:30 PM CET, kick off against Valladolid is scheduled for tomorrow afternoon at 4:00 PM CET

FC Barcelona have arrived in Valladolid. The first team’s plane touched down in the Spanish city at 8:20 PM CET, after nearly an hour-long flight. The Barça expedition is led by Vice-President Jordi Cardoner, directors Pilar Guinovart and Joan Bladé and Football Directory Andoni Zubizarreta.

It’s worth noting that Gerardo Martino has named 18 players to the team for tomorrow’s match. Andrés Iniesta was initially named to the team but won’t feature against Valladolid due to personal reasons. Ibrahim Afellay was named to the team in Iniesta’s stead.

Upon arrival to Valladolid, the team went directly to AC Palacio de Santana Hotel, where they will spend the night ahead of tomorrow’s match. Kick off is scheduled for 4:00 PM CET.