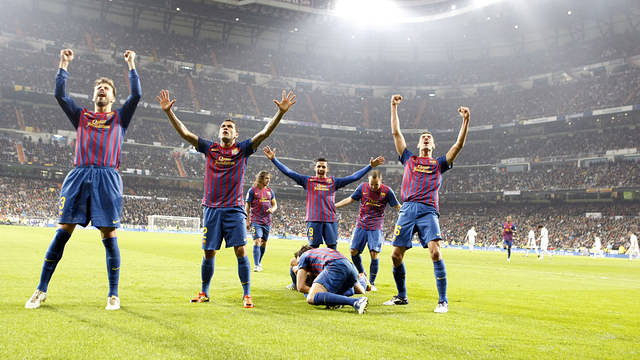 The Santiago Bernabéu is the venue on Sunday for the latest meeting between old rivals Real Madrid and Barça. Here we review some key stats,

There are few games to compare with FC Barcelona against Real Madrid and Sunday brings the 168th league meeting between the two sides. The venue will be the Santiago Bernabéu, and with the home team four points clears of FCB, and Atlético Madrid also in contention for the title, this latest edition of the clásico promises to be one of the most gripping ever.

Here we take a look at some of the key stats going into one of the biggest games of the Liga season:

· It is 27 years since a league game between Real Madrid and Barça has ended without score at the Santiago Bernabéu.

· Gerardo ‘Tata’ Martino could become the fifth coach to win in his first ever trip to the Bernabéu in charge of Barça. The only managers to achieve that before have been Venables, Van Gaal, Rijkaard and Guardiola.

· Xavi Hernández has appeared in 38 clásicos, with 15 wins, 12 draws and 11 defeats. He has scored five goals, and whenever he has found the net, Barça have not lost.

· As many as ten members of the current Barça squad have scored in the past against Real Madrid; Messi, Xavi, Alexis, Pedro, Puyol, Piqué and Cesc all scored at least once at the Santiago Bernabéu, while Adriano and Alves got theirs while playing for Sevilla. Jordi Alba and Neymar scored at the Camp Nou, the Brazilian in his first ever encounter with the all-whites.

· Barça have won five of their last ten league fixtures at the Santiago Bernabéu. They lost four of the others, while there has been only one draw.

· Leo Messi is the top league goalscorer against Real Madrid in the current Barça squad. In 15 games, the Argentinian has found the net 11 times.

· Messi could also equal former Madrid player Hugo Sanchez’s record of 234 league goals this Sunday. At the moment, the Barça striker has 232.

· For Real Madrid in league matches, Cristiano Ronaldo has scored 4 goals in 9 games against Barça, and he is followed by Sergio Ramos, who has 3 in 17 games.

· Four Barça players (Neymar, Sergi Roberto, Montoya and Bartra) and also manager Tata Martino are about to get their first experience of a clásico at the Santiago Bernabéu. For Madrid, the newcomers are Bale, Isco, Illarramendi and Carvajal.