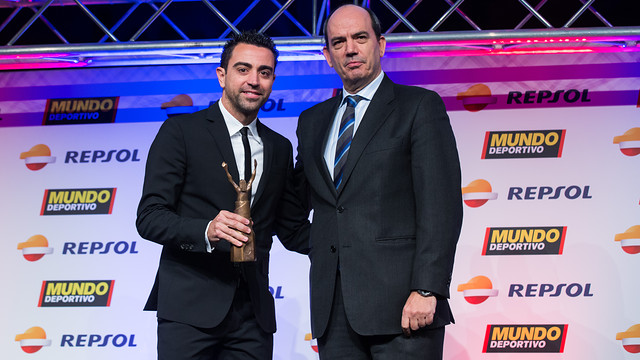 Xavi Hernández was given the Extraordinary Award, Neymar Jr won the Most International Player Award and Tito Vilanova was named the best manager

The Congressional Palace of Catalonia hosted this Monday evening the 66th edition of the Great Gala of Sport organised by Mundo Deportivo. President Josep Maria Bartomeu, who was accompanied by vice-presidents Jodri Cardoner, Carles Vilarrubí and Jordi Mestre, and the directors Eduard Coll, Joan Bladé, Manel Arroyo and Jodi Monés, represented FC Barcelona at the Gala.

Two first team players received awards this evening. Xavi Hernández, who just broke the 700 matches played barrier with FC Barcelona, was awarded the Extraordinary Trophy. “It’s very difficult to play for Barça because of how demanding it is, but I’ll try to reach 800 games. I feel good physically,” said the midfielder during the Gala. He also talked about Luis Aragonés, who passed away on Saturday. “He was my footballing father. I have a lot of appreciation for him and Spanish football owes him a lot.”

Neymar Jr was given the Most International Player Award, the trophy was received by Jordi Mestre. Tito Vilanova also picked up an award – the former FC Barcelona manager led the team to the league title last season. Jupp Heynckes, Bayern Munich’s former manager, handed Tito’s award to Andoni Zubizarreta. The German also gave Barça’s football director a gift and a letter from Bayern Munich for Vilanova. Heynckes also said, “Tito you are a great champion of sport and life. In me you have a friend for life.”