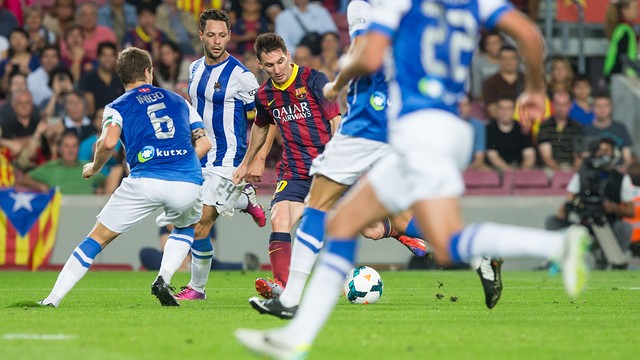 Only five of the Basques’ 18 results at home this season, would be enough to see them through to the final on Wednesday.

Real have the best home defensive record in La Liga

Real Sociedad have played 18 home games so far this season, winning ten – just five of which results would take them through against Barça on Wednesday night. That game will be the Basques’ fourth Cup game at Anoeta this campaign, having beaten Algeciras 4-0, drawn 0-0 with Villarreal and beaten Racing Santander 3-1.

Anoeta has proved to be one of the toughest grounds for visiting teams this season, with Real winning seven games, drawing three and losing just once and with just seven goals conceded (against 27 scored), Real have the best defensive home record in La Liga, alongside Atletico Madrid and have had big wins against Elche, 4-0, Betis, 5-1, Osasuna, 5-0 and Almeria, 3-0.

None of Real’s results in the Champions League would, however, see them through against Barça. The Basques enjoyed a difficult group stage after overcoming Lyon in the qualifying round (with a 2-0 win at Anoeta) losing to Shaktar (0-2) and Bayern Leverkusen (0-1) and drawing with Manchester United (0-0).

A 2-0 win for Real on Wednesday would force extra time – that’s a result that they have achieved three times this year, in the league against Getafe and Bilbao and against Lyon in the Champions League qualifiers.

Barça’s record on the road

For their part, Barça have lost just twice away from home this season, though one of those games was in the Basque Country, when they went down 1-0 to Bilbao. Martino’s side’s other defeat came in Amsterdam when Ajax beat them 2-1 in the Champions League group stages. Neither defeat would be sufficient, if repeated on Wednesday to stop Barça reaching yet another Cup Final.