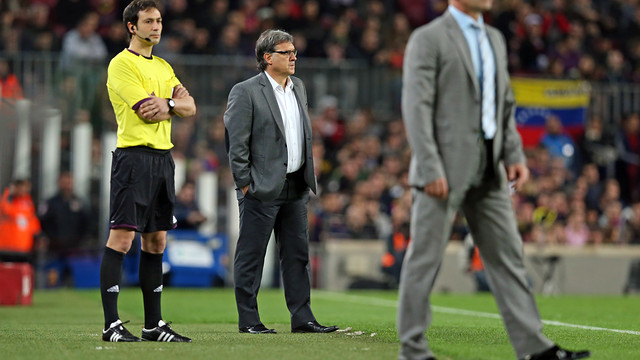 “Scoring in the second minute gives you a bit of tranquility,” says the manager

In the press conference after the 6-0 victory over Rayo Vallecano, Gerardo Martino said that if his team continue to play at this level that “our chances increase in the Champions League” and he explained the he prefers to go into the match against Manchester City with a game like tonight’s under his belt. “I didn’t think it was all that bad when we tied or lost, and I don’t think it’s so simple after a match like today’s. If I have to choose, I’d pick a match like today’s ahead of our game against City.”

When asked about his team’s performance Martino noted that “we play better when we have fun. Today we entertained a lot of people. I hope we can get 20,000 more people to fill the stadium.” The Argentinian manager went on to say that it’s helpful to score early: “scoring in the second minute of a match gives you tranquility and it makes you play differently.”

“I’d like to think that Messi still has a bit to go before he’s 100 percent fit. If he wants, he’ll break any record he sets his mind to. He’s only 26 years old and he’ll lose count [of the records he breaks]. Barça enjoy him and Argentina does as well,” said Martino, who praised the work of Cesc and Iniesta: “Andrés and Cesc played a very complete match, they controlled all aspects of the game.”

The manager also revealed that he has yet to make a decision on the starting line-up against Manchester City and he noted that all of his players “have a chance of playing, I could very well commit an injustice.” When asked about the upcoming showdown with the Enlgish team, the manager believes that the side that enjoys the most possession will have the advantage: “Whoever has the ball will have more chances of winning the game. Both Barça and Manchester City defend by having possession.”

Finally, Martino said, “we’re on form coming into the match against City, this is the perfect moment to try to qualify for the quarter-finals. Most of the players are playing really well.”