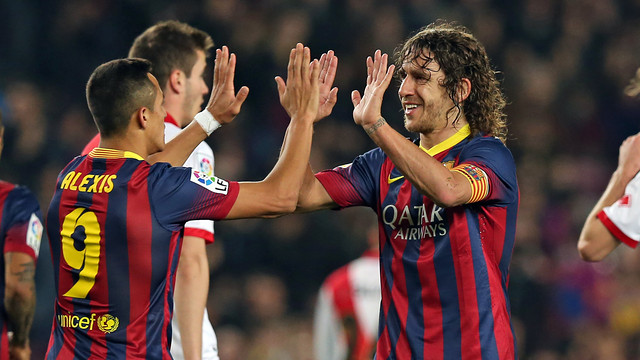 The Barça thrashing of Rayo Vallecano (6-0) saw the return to the pitch of the central pairing from the 6 titles season, Pique and Puyol. It was over a year since the two players formed the central pairing at the heart of the defense. Their last match togetherwas the first leg of the knockout stages of the Champions League at the San Siro last season. This year,  Pique and Puyol had been together in the starting lineup in the match played at the Amsterdam Arena, but Puyol played right back. Here are the match stats:

Cesc Fàbregas was the player with most passes (109) and also most completed ones (96), 88% effective

Adriano scored the firts goal after only 1 minute 36 seconds, the quickest goals cored this season

The 74.517 spectators who witnessed the thrashing was the biggest attendance of 2014

With his assist for the 4th goal, scored by Pedro, Cesc Fàbregas hs now accumulated 15 assist over the season