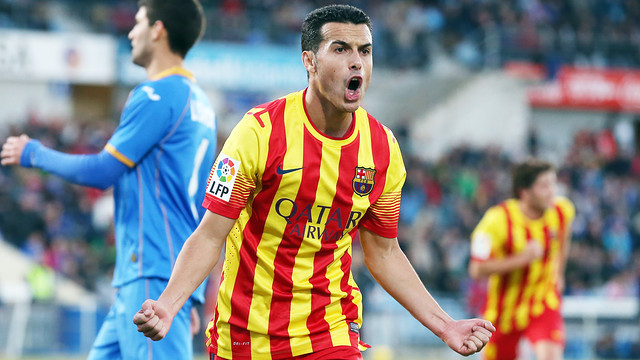 The Spaniard has scored some vital goals in finals such as the European Super Cup, the World Club Cup or the Champions League

Pedro Rodríguez made his Barça debut at the Camp Nou on January 12 2008 in a league game against Murcia, when he came on for Samuel Eto’o who had just scored twice in the 4-0 win. Six years later, Pedro marked game number 250 in a Barça shirt in the game against Seville.

Pedro has proved his worth under Guardiola, Tito Vilanova and Tata Martino, who have all leaned on the winger’s pace and skill, as well as an extraordinary scoring record.

In seven seasons, Pedro has bagged 89 goals. He scored his first on 16 August 2009  in  the first leg of the Spanish Super Cup against Bilbao  – a goal that gave Barça the win. Twelve days later, his extra time winner against Shaktar Donetsk gave Barça the European Super Cup.

Pedro also played a key role in the World Club Cup win in 2009, with a last minute equaliser in the final against Estudiantes, before Messi’s extra time winner. In the Champions League he also got some vital goals, including one against Real Madrid at the Camp Nou in 2011 which sent Barça through to the Wembley final, where he scored the opener against Manchester United.

This season has also seen Pedro claim his first hat trick  – against Rayo Vallecano – something he then repeated against Getafe.