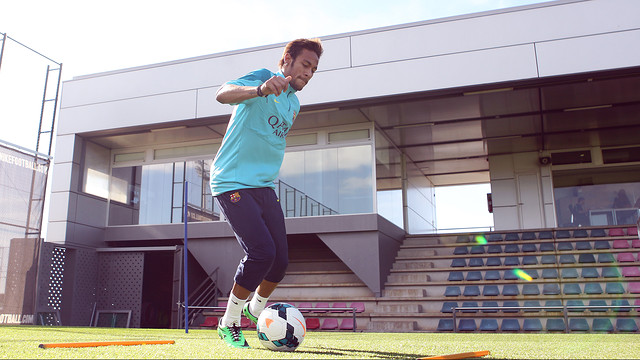 After 29 days, the Brazilian has finally managed to put his ankle injury behind him

After getting injured against Getafe, he has missed eight official matches

The Brazilian magic is back. Neymar Jr was declared fully fit following the Friday training session and has been included in the provisional squad to face Rayo Vallecano at the Camp Nou on Saturday evening (8.00 PM CET, GolT and Canal+ Liga).

It’s the first time he has appeared in the squad since spraining his right ankle against Getafe 29 days ago, during which time he has been forced to sit out eight first team matches.

During his time away from duty, Neymar Jr has celebrated his first birthday as a Barça player, visited the club museum and appeared on the cover of Japan’s ‘Zone’ magazine.

With the squad since Monday

The Brazilian superstar has been training with the squad since Monday, but only today was it finally confirmed that he would be fit to play, if picked, against Rayo Vallecano.

Neymar has played 25 games this season, scoring 11 goals. FC Barcelona have won 18 of the games in which he has featured, while drawing five and losing just two, against Ajax and Athletic Bilbao.