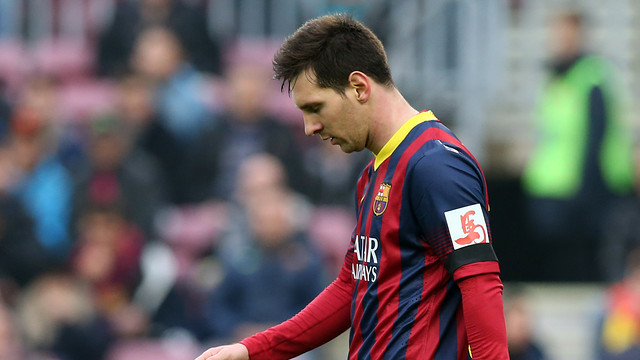 FC Barcelona have lost at home to Valencia, which ends a run of 25 consecutive league wins at the Camp Nou

Some days nothing seems to go right. And this was one of those days. FC Barcelona have suffered painful defeat at home to Valencia, which brings an end to a wonderful run of 25 consecutive wins in league matches at the Camp Nou. The visitors, coached by former FCB man Pizzi, took a practical approach to the game and took their chances when they came. They go home with all three points from a match that looked to be safely under Barça’s control at half-time, but from that moment on, luck was simply not on Barça’s side.

Not even Messi’s penalty to put Barcelona back in contention, or the immense pressure in the final minutes despite being a man down following Alba’s sending off, were enough to prevent Valencia from winning at the Camp Nou for the first time in a decade. And this defeat is also a huge setback for FC Barcelona’s title challenge, with both Atlético and Real Madrid able to replace them at the top of the table when they play on Sunday. But there are still 16 games to go, and there are sure to be plenty more twists in what is developing into a fascinating three-way battle for the title.

1-0 but could have been more

Following an emotional minute’s silence in memory of Luis Aragonés, the former manager of both these clubs who passed away this morning, the game got under way with Barcelona looking confident. So much so that it took 97 seconds for Valencia to even get a touch of the ball. The visitors seemed happy to sit back and wait, but were caught out by an extraordinary goal from Alexis, who collected an assist from Messi and chipped the ball over Diego Alves from the tightest of angles.

For 25 minutes it was one-way traffic. Valencia looked way out of their depth, and there was absolutely no suggestion at this point that they would actually end up winning this game. The chances were flowing for FCB, with one falling to Busquets, then Alexis came close with a header, and Messi had several opportunities to extend the lead.

It was in only their second meaningful attack of the game that a quick one-two involving Parejo and Feghouli saw Valencia draw level right on the edge of half-time. It was a serious setback for Barça, but there were still plenty of reasons to feel very optimistic about the second half.

But the game had barely restarted when a Barragán run up the right led to Piatti beating Valdés following a madcap series of shots and rebounds. In just four minutes of playing time, Barça had gone from leading 1-0 to losing 2-1.

Barça didn’t take long to conjure up a response. A Pedro shot stuck Ricardo Costa on the arm, and the referee had no doubts about indicating the penalty spot. Diego Alves is a specialist when it comes to saving penalties, but he was up against the world’s greatest specialist in scoring them, and Leo Messi found the net with expert efficiency. It had taken just moments to cancel out Valencia’s second, and the Camp Nou was now in full song as the fans started to sense another famous comeback was on the cards. But in the 59th minute, yet another lethal counter attack from the visitors resulted in Paco Alcácer putting Barça a goal down once again.

Martino responded by sending Iniesta on for Xavi, and there was still half an hour for Barcelona to turn the game around. But they never really seemed able to find the rhythm they feel comfortable with, while the Valencia defence managed to soak up all the pressure, and found their job made considerably easier when Jordi Alba was red carded for a second bookable offence.

In the dying minutes of the game, when almost all hope seemed lost, an incredible piece of football from Messi saw the Argentinian in an ideal position to score. The Camp Nou roared, but Diego Alves somehow managed to get his foot to ensure that the ball went wide by the narrowest of margins. This was indeed the day when nothing seemed to want to go right.