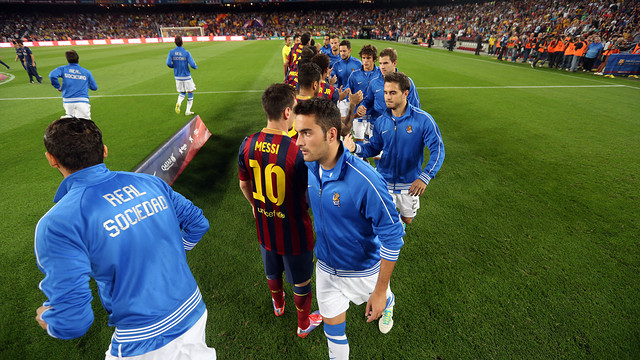 Martino called up all available players to the team, he must cut for players from the squad before kick off

FC Barcelona and Real Sociedad kick off an exciting tie this Wednesday evening at 10:00 PM CET. Catalans and Basques will duke it out for a spot in the final of the Copa del Rey, a competition the Blaugrana recently won in 2012 and 2009. After the defeat on Saturday to Valencia (2-3), the match presents a good “opportunity to vindicate the team” declared Tata Martino on Tuesday.

On paper the tie looks fairly level despite the 4-1 result from the Liga match between the two sides. Both Barça and Real Sociedad, since the new year, have practically identical records: The Culés have secured a total of eight points in 2014 to the White and Blues’ seven, and both teams cruised in their quarter-final ties, against Levante and Racing respectively.

FC Barcelona are nearly at full strength for this evening’s match. Only Neymar Jr, Dos Santos and Oier (all of whom are injured) were not named to the 22-man team by Tata Martino. The manager will have to cut four players from the squad before kick off.

Will Canales make his debut?

It’s not all good news, however, for the Basque side. Estrada, De la Bella, Granero and Markel Bergara will miss the first leg of the tie due to injury. Real Sociedad will try to get a good result at the Camp Nou ahead of the second leg at the Anoeta.