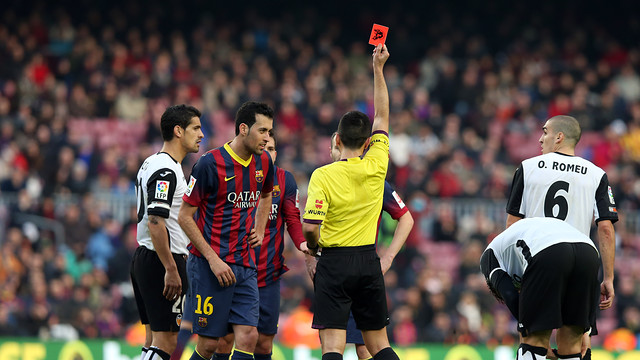 In addition to not securing any points this weekend against Valencia (2-3), Barça will be without two key players for their next La Liga match against Sevilla due to the suspension of Javier Mascherano and Jordi Alba.

52 matches without a red card

Curiously enough, Jordi Alba’s red card was the first of the season for FC Barcelona. In fact, no Barça player has been ejected from a game since the Clásico was played nearly a year ago; 52 games have been played since then.

Without Mascherano and Alba, Martino will have to send out a very different defence to the one we saw this Saturday. The manager will be able to choose from Piqué, Puyol and Bartra for two positions, while Adriano looks like he’ll start against his former team.

Before the match against Sevilla, Barça will take on Real Sociedad in the semi-finals of the Cup. The match is scheduled for 10:00 PM CET on Wednesday.