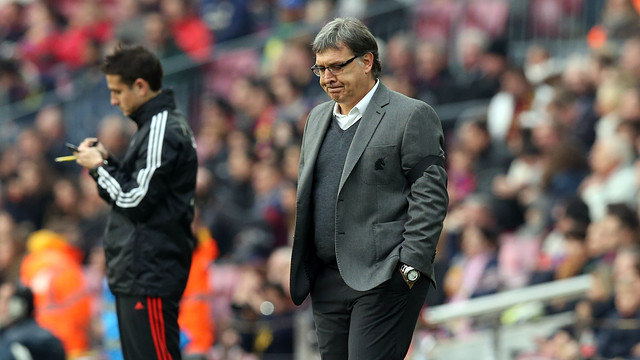 The FC Barcelona manager expects his team to lose the top spot of La Liga this weekend: “We are now playing in a completely different league than we were before”

Zubizarreta: “Nothing is won in February”

Andoni Zubizarreta talked about FC Barcelona’s defeat this afternoon. “Nothing is won in the month of February, but this defeat is difficult to stomach because everything is so close.” The director of football continued: “We could have done a better job and Valencia forced us to play a game that didn’t suit us.” Zubizarreta believes that the team must recover, analyse the game and quickly focus on their next match, which is scheduled for next Wednesday at the Camp Nou against Real Sociedad in the Copa del Rey.

“We had the impression that the match was over after half an hour and we paid for that. I said that we will pay for our errors, and we committed errors today,” explained Tata Martino, who warned on Friday that “any error from now on out could cost us dearly.” He added: “Their goal at the end of the first half hurt us and we lost confidence. Their second goal made us desperate.”

The FC Barcelona manager is aware that his team very well could be dethroned from the top of the tale. “Now we’re playing in a completely different competition,” said Martino. “We will try to regain the ground that we will most likely lose this weekend. We still have to play against our direct rivals. I’m concerned and I want to bounce back from this as soon as possible.” He added: “We cannot give up.”

Killing games off when given the chance

Barça fought hard to equalise in the second half, but to no avail. “There are matches where we managed to fight back. Today we tried, but we lacked ideas,” said Martino. He added: “When you have the chance to finish a game off you do it, you can’t give your rivals a chance – that’s what he did and Valencia took advantage.”

Martino also expressed his condolences to the family and friends of Luis Aragonés: “The footballing world has suffered a huge loss.”