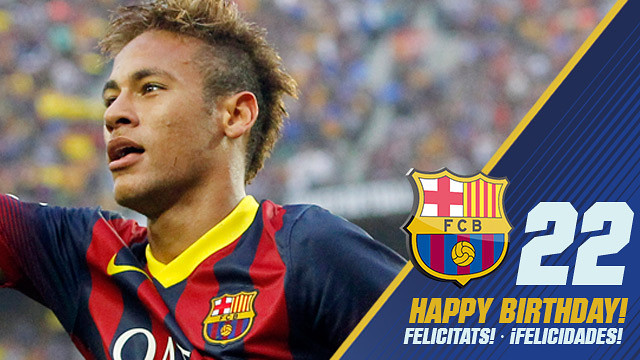 The Brazilian, who turns 22 this Wednesday, celebrates his first birthday as a Barça player

On February 5 1992 Neymar da Silva Santos Junior was born in the Brazilian town of Mogi das Cruzes, in the state of Sao Paulo. 22 years later the Brazilian celebrates his birthday in the Catalan capital as a Barça player.

Neymar Jr is currently focused on his recovery from the ankle injury he picked up in the Copa del Rey tie against Getafe on January 16. 20 days have passed since the incident and the Barça forward is working hard to be match fit for the upcoming Champions League tie against Manchester City.

His stats at Barça

This is Neymar’s first season at FC Barcelona since he arrived at the Club last summer. The Brazilian has played 25 matches, scored 11 goals and won one title, the Spanish Super Cup – he scored the tying goal away to Atlético Madrid, which gave Barça the advantage and eventually the title.

In the Champions League match at the Camp Nou against Celtic (6-1), Neymar scored his first hat-trick for FC Barcelona. Six days later, in the Barça-Cartagena Cup tie, he became the first and only player on the Barça roster to score in all four competitions (Liga, Copa del Rey, Champions League and Spanish Super Cup).