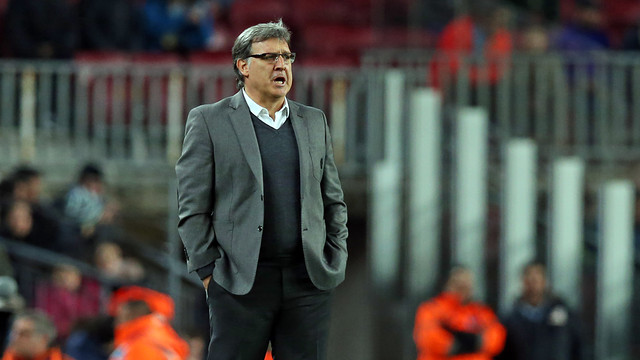 “We didn’t dominate to the point that would allow us to think we could have killed off the tie,” says the manager

Gerardo Martino said during the post-match press conference that Barça played “a good game, we didn’t take any risks. We were a bit apprehensive because of Saturday’s game against Valencia.” The manager went on to say that “we scored twice, probably thanks to chance and not because of how we played,” and he praised Pinto for his superb performance: “he’s always performed well since he arrived at Barcelona.”

When asked about the match against the Basque side, Martino said “in the match against Valencia, in the first half, we played well but we didn’t finish off well. Today we didn’t dominate to the point that would allow us to think we could have killed off the tie.” He added: “the players that played against Valencia needed to play this match because if I had taken any of them out perhaps I would lose a player in the future.”

When asked about Messi, Martino said that “I’m not worried about Messi scoring goals. He had three clear chances today, and one of them the keeper saved from point blank range – he’ll score again soon.” On the kick off time and the 38,505 fans that came to the Camp Nou, the manager said “the kick off time wasn’t the best for fans, because you go to bed very late and that’s a good reason (not to come).”

Finally, Martino highlighted his “team’s organisation against Real Sociedad, their eagerness to score the second goal and their patience.”