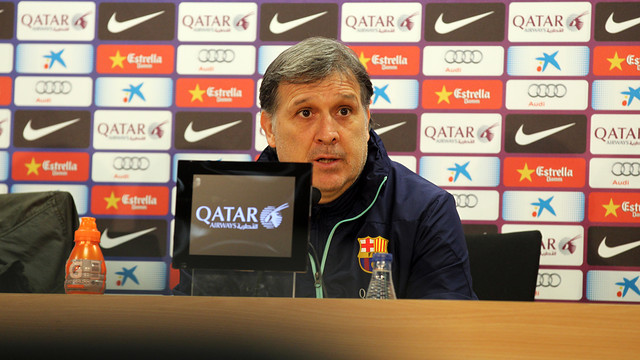 “It’s harder to control the game when you play with three strikers” says Martino. “With an extra midfielder our control is better and we run less”

“It would be improper not to perform well in San Sebastian. Our intention is to play well and win” he adds

Gerardo Martino has spoken to the press the day before his team travels to Real Sociedad (Saturday, 8.00 PM CET). He expects a difficult match that “will have nothing to do with the cup game. This is the league.” He adds that “we have to keep growing as a team … Now is when things get decided, it’s the end of the season”.

“It’s harder to control the game when you play with three strikers” says Martino. “With an extra midfielder our control is better and we run less.” He also explained that “we have changed as many as nine players between games in the past but this will become less common from now on. You won’t be seeing as many changes, although there will always be modifications to maintain the tension among the players and for everyone to feel that they’re playing their part”.

If Barça go all the way in every competition, then they still have another 21 games to play this season. “Now we have to concentrate on the league” says the manager. “We have to aspire to winning every game we have left … It would be improper not to perform well in San Sebastian. Our intention is to play well and win.”

Asked if he feels his team has reached the peak of its form, the manager replied that “we have done well in our last few games, and if we can continue improving and maintain our level for the next 70 or 80 days, then we have a very good chance of achieving things.”

“What’s happening with Neymar is not normal, but in terms of the playing time is getting and the way he’s performing, there’s nothing wrong” he continued. He was also asked to describe how he has seen his team develop since the first game of the season. “We have generated intensity, we make our opponents uncomfortable by creating pressure” he said. “We have done well in creative terms, but we’re not consistent enough in front of goal. We’re also secure at the back. We’re not conceding many goals.”