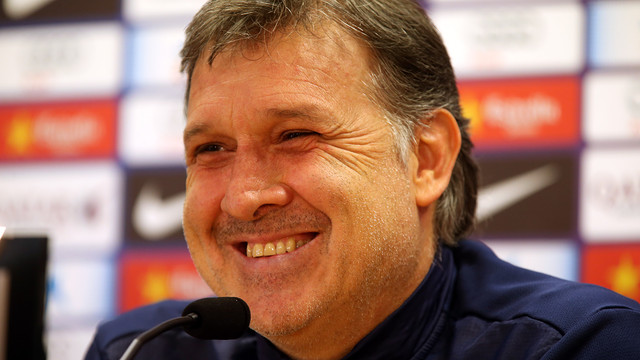 Martino reckons the team are still in the title race: “it’s still in our hands”

As the business end of the season closes in, every little mistake takes its toll and Saturday’s slip up against Valencia cost Barça the leadership in the league, something Gerardo Martino insisted at his press conference this lunchtime, that the coaching staff and the players had looked at very closely: “we have talked about the mistakes we made in the second half against Valencia and about our tactics”

The focus today though, was on the Cup and Martino explained that he wasn’t sure how Real Sociedad would be going into Wednesday’s match: “this last weekend they played without an out and out number nine, but they may change that tomorrow. How they play also depends on how we go into the game and if we can force them into playing a particular way”.

Martino also insisted on the importance of closing down games when the opponents try and get back into contention, as happened against Valencia: “when we are in control and winning, we need to remember how to close things down. Normally, when we start scoring, we’ll win by two or three goals”. [[CITA_2]] However, the boss believes : “although we’ve dropped to second place, it’s still in our own hands. I hope we won’t have any more slip ups – you can’t rule us out of the title just because of 45 poor minutes. The truth is that we are just one game behind the leader and they have to come here to the Camp Nou for the last game of the season“.

“We know that with each week, there are fewer games left to play and if you make a mistake it’s not easy to make it up, but after every defeat the next game is a chance to prove yourself”.

“when we are in control and winning, we need to remember how to close things down”.
“You can’t rule us out of the title just because of 45 poor minutes”