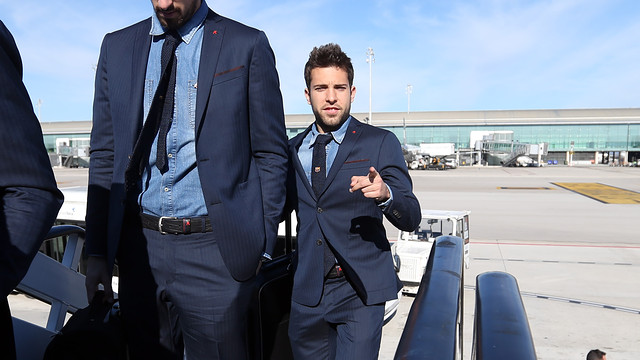 The team are on their way to the Basque city, where they will play tonight at 10.00PM CET, in Anoeta

Tata Martino is taking the whole squad with him, faced with the real possibility of reaching the Spanish Cup Final

Tonight, Barça play the second leg of the Spanish Cup semi-final against Real Sociedad (10.00PM CET). With the 2-0 win from the first leg, Martino’s team are travelling to San Sebastian with the aim of consolidating on the decent result, and ensure their ticket to the Final. The plane carrying the Barça players is on it’s way to San Sebastian, where it is scheduled to land at 12.15. Faced with the possibility of qualifying for the Cup Final, Tata Martino wanted all his players to be present in Anoeta tonight.

Vice-President Jordi Mestre heads up the Barcelona expedition to San Sebastian. This is his first trip with the team since taking up his role as Vice-President of Sports, at the end of January. Also travelling with the squad are Director Jordi Moix and Professional Football Sports Director, Andoni Zubizarreta.

After the match against Real Sociedad, Barça will spend the night in San Sebastian, and return to Barcelona on Thursday morning. The team are scheduled to train at the Ciudad Deportiva at 1.00PM CET on Thursday.