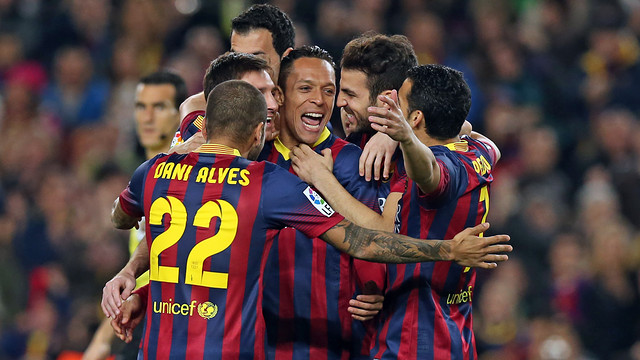 Barça put on a sparkling performance to reaffirm their top spot with a 6-0 win over Rayo.

Adriano, Messi (2), Alexis, Pedro and Neymar scored the goals in the win.

Three days ahead of their trip to Manchester, Barça put in a sparkling performance, putting six past Rayo and treating the Camp Nou crowd to a brilliant attacking display, with Messi, Cesc and Iniesta dazzling the fans. Two first half goals opened the door and after the break  the chances and goals just kept coming.

The game could hardly have started better for Barça when Adriano cut inside from the left and fired an unstoppable drive low into the far corner in the first minute. Rayo refused to park the bus though and despite the obvious gap in class between them and their hosts, the Madrid team stuck firm to their own attacking style and the game opened up with both teams playing the ball out from the back and pressing high up the pitch.

Barça were sharp and hungry looking, showing some brilliant touches but just missing a bit of luck in front of goal, with both Messi (min 13) and Pedro(min 17) hitting the woodwork. Iniesta and Messi were orchestrating the attacks, whilst Rayo gamely fif their best to equalise, only to find Valdes on top form.

Rayo’s high defensive line proved their undoing on 36 minutes when a slide rule pass from Cesc found Messi running onto the ball on the edge of the box to superbly chip the keeper with his first touch – a goal which drew him level with Di Stefano as the league’s fourth highest scorer of all times.

Rayo continued to go toe to toe with Barça after the break, but now the hosts were able to take more advantage of the spaces this left them close to the Rayo goal. Messi played in Alexis to round off a quick counter on 52 minutes and the Chilean slotted home, then in the move of the night, Iniesta played a brilliant back heeled one-two with Cesc, who unselfishly squared the ball across the goal for Pedro to make it four. The 75,000 fans at the Camp Nou were on their feet now, as the team refused to take their foot off the gas and continued to push for more goals.

Martino gave the crowd something else to cheer, bringing on Neymar after his month long injury lay off on 61 minutes and five minutes later Cesc again showed his generous side to set up Messi – now the third highest league scorer alongside Raul  before the Argentinean was substituted to a rousing ovation with 15 minutes left.

With Tello on for Messi, Neymar took the false 9 role on and rounded off a wonderful night with an unstoppable effort from distance to make it six and send Barça off to Manchester with a real spring in their stride.