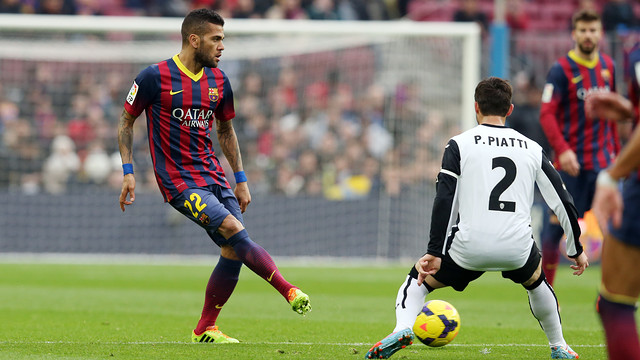 FC Barcelona kicked off February with an unexpected defeat at home to Valencia. The Blaugrana, for the first time this season, lost a match at the Camp Nou. “We scored a goal, we had control and then we were predictable,” said Dani Alves after the match against Los Che.

“We let three points slip away when we had the match under control,” continued the Brazilian, who admitted that his team “gave away opportunities to a rival that didn’t have mercy.” Alves added: “We lost and now we have to pick ourselves up. There’s no time to  feel sorry for ourselves.”

The Brazilian isn’t concerned with losing the top spot of La Liga: “You lose the lead at the end of the season, not now.”

When asked about Barça’s defensive performance, Alves said that “in general it’s not just a question of how well we play on defence, we play a collective game where we all have to defend.”

“This is the first defeat in a long time. It was an untimely loss,” said Sergio Busquets after the match. The midfielder said, “we didn’t play well, there are no excuses,” and he especially highlighted the fact that “Valencia used their weapons well …You suffer more when you concede three goals,” he indicated.

Busquets also praised Valencia’s newly appointed manager: “They are doing much better under their new manager.”