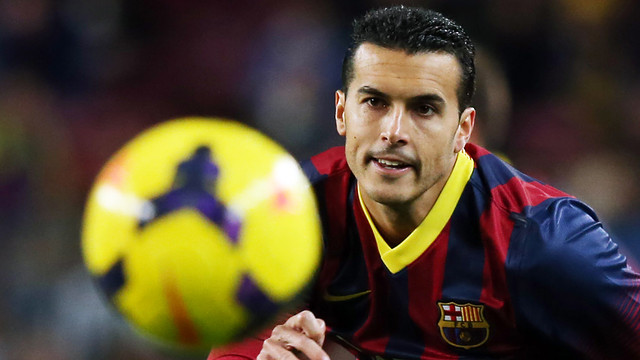 Days before the first leg of the Champions League knock-out tie between Manchester City and FC Barcelona at the Etihad, Pedro Rodríguez was interviewed by Sid Lowe for The Guardian. The Canary Islander opened up about his esteem for his former manager Pep Guardiola, the difficult Champions League tie against Manchester City and the daunting challenge of getting consistent playing time for one of the most star-studded teams in the world.

The Spanish forward, who featured prominently for Barça’s reserve team in the 2007/08 season, was promoted to the senior side after Pep Guardiola’s promotion winning year with Barça B in 2008. Pedro recalled that “Pep was exactly the same. The fact that it was the first team made no difference: it was the same analysis, the same philosophy, the same work. We had a long conversation after the Copa del Rey final [Guardiola’s last game on the Barça bench, Lowe points out] and I said ‘thank you.’”

He adds: “When a coach trusts you enough to take you from the youth team and put you into the first team, one of the best teams in the world, it’s not easy. He had faith in me and supported me. Without that, a player can lose heart and look for a solution away from the club.”
[[CITA_1]]
But despite the fact that Pedro has had to battle for playing time with some of the most prolific forwards in recent history (Eto’o, Ibrahimovic, Henry, Messi, etc.) things have gone extraordinarily well for the forward. In addition to winning an impressive amount of titles, including the World Cup and two Champions League crowns, he’s managed to win over the managers that succeeded Guardiola on the Barça bench. Under Tata Martino, the player has started 27 matches – a total of 2,379 minutes – and he’s scored a total of 17 goals – only Messi and Alexis have scored more than the Canary Islander in all competitions this season.

“When I started we had Samu [Eto’o] and Titi [Henry] and Zlatan [Ibrahimovic] too. Now we have Alexis, Messi, Neymar. Another new signing, another big name, will probably arrive in the summer but I’ll keep on going,” he said. “You know it’s always difficult to get minutes. I know the best games for me ar the ones where there’s space to run, to get away from defenders. That suits me and the team. Unfortunately, there’re few games like that. But the mister [Tata Martino] is giving everyone a chance, rotating a lot, and I’m happy with the opportunities I’ve had and the way I’ve taken them.”
[[CITA_2]]
The forward went on to say that it doesn’t bother him when his team-mates are selected ahead of him on game day. “Of course, I want to play every game but you have to accept rotations and understand that other players are in good form. Even when you think you should be playing more, you have to stay positive for when the opportunities arise,” he said. “If not, then at the end of the season you analyse the situation and look for the best solution.”

Mr Lowe then asked the FC Barcelona forward about the then upcoming first leg of the Champions League tie against Manchester City. “I watch City when I can. I enjoy watching them play and when there’s a team you know you’re going to face, it’s good to see what form they’re in and analyse them.” He added: “You try to avoid the strongest teams but we knew we could get them … There are some opponents you prefer, that’s the truth. Maybe this way we will be even more focused than ever, because we know how difficult it is.”

Read The Guardian article in its entirety here.

When a coach trusts you enough to take you from the youth team and put you into the first team, one of the best teams in the world, it’s not easy. He had faith in me and supported me
Even when you think you should be playing more, you have to stay positive for when the opportunities arise