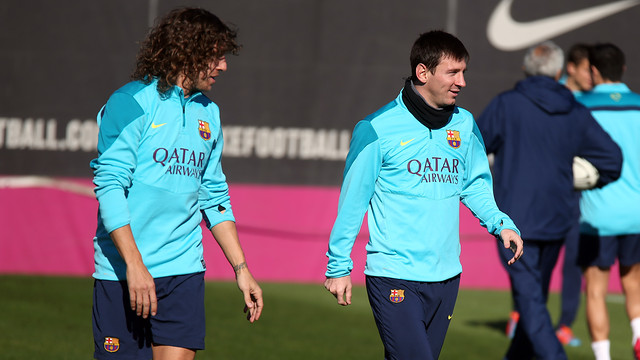 All of the available players trained this morning at the Ciutat Esportiva, and were joined by Sergi Gómez and Bañuz of Barça B, and Suárez from the youth team

Neymar continued working separately from the rest of the squad

Several FC Barcelona players were called upon by UEFA doctors this morning to take one of their routine doping checks. Cesc Fàbregas, Pedro, Iniesta, Messi, Neymar, Song, Afellay, Adriano, Alves and Cuenca all passed their blood and urine analyses.

The first team’s next fixture is away to Sevilla at 9.00 PM CET on Sunday. Tata Martino has been training with all of the available players, although he already knows that Javier Mascherano will be out through suspension this weekend, while Jordi Alba’s presence in the Andalusian capital depends on the outcome of an appeal against one of the yellow cards he was shown against Valencia.

Friday morning was training as usual at the Ciutat Esportiva, although the players were joined by Barça B’s Sergi Gómez and Bañuz, as well as youth goalkeeper José Aurelio Suárez. And there was also an unusual touch when a rugby ball was produced for the warm-up session. While all of this was going on, Neymar worked out in isolation in a separate part of the field, as he continues his recovery from injury.

Barça have one more session before leaving for the Sánchez Pizjuán. That will be on Saturday morning at 11.00 AM CET, once again at the Ciutat Esportiva, after which Tata Martino will be holding a press conference to discuss Sunday night’s league match.