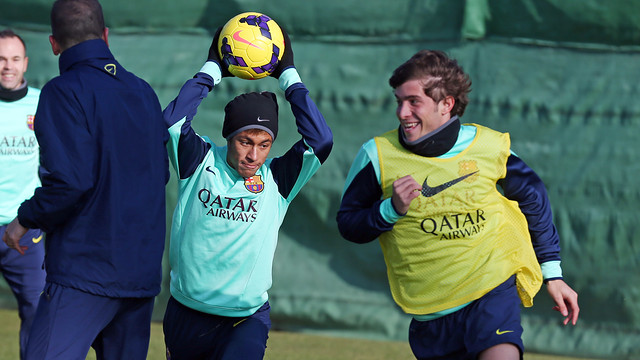 Neymar, Song, Alexis and Mascherano were all back to work on Thursday, with Messi due to arrive later today

Alves is also back in Barcelona but missed training after going down with a fever. Afellay was able to train normally

The players that live outside of Spain were back in training this morning. FC Barcelona started 2014 with 20 players, with all of Neymar, Song, Alexis and Mascherano back alongside their colleagues. They were joined by the players that had already trained at the end of 2013 (Valdés, Pinto, Puyol, Xavi, Pedro, Montoya, Bartra, Piqué, Alba, Sergio, Cesc, Sergi Roberto, Tello, Iniesta, Adriano and Afellay, who was once again able to complete the full session). Tata Martino therefore has practically all of his squad together as he prepares for Sunday’s game at the Camp Nou against Elche (16.00).

As planned, Leo Messi will be returning to the club this Thursday evening, when there is a second session scheduled for 19.00. But Dani Alves was unable to attend training this morning. Although the Brazilian is back in town, he has gone down with a fever and stayed at home, while Cuenca worked out on his own.