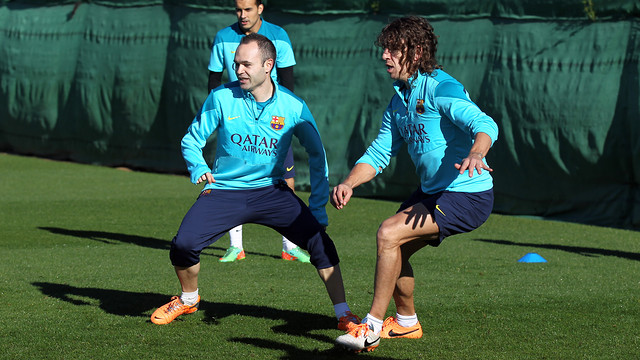 The two, who missed the Malaga game, trained normally with the rest of the players, as did Song and Montoya.

Andrés Iniesta and Carles Puyol were with the rest of the squad in training at the Ciutat Esportiva this morning, after missing the Malaga game, alongside  Alex Song and Martín Montoya, who had also picked up slight knocks.

The players who featured in last night’s win – including Pedro who picked up a knock – did some gentle recovery work, whilst B team players Dongou and Ortolà, alongside Youth A team youngsters Enguene and Ebwelle were also involved.

The squad will return for training on Tuesday morning, with the focus on Wednesday night’s Cup quarter final against Levante at the Camp Nou.