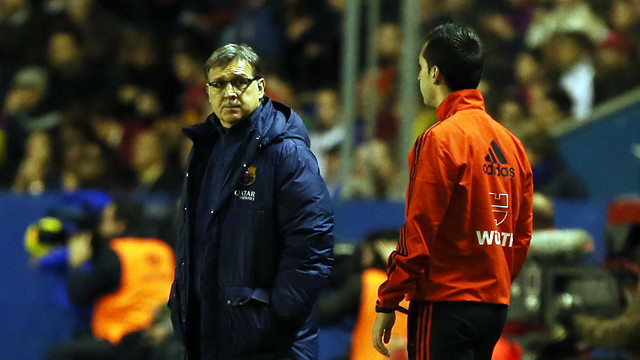 Gerardo Martino said that Barça played “to win the match and play good football” in the post-match press conference held at the Ciutat Esportiva. “The result isn’t what we came here for nor was it what we deserved,” he added. The Argentinian manager also noted that “we were not fortunate in front of goal” and that the rest of the season will bring about “many more surprises. I think the remaining 18 rounds of the season will show that.”

When asked about Levante, Martino said that they “have improved a lot from the beginning of the season,” and that Barça tried everything possible to secure the three points. “There’s not much to say. We tried and we did a good job. We tried to win the match from the outside and the inside. Their keeper played a great match.”

Finally, Martino said that “we’re leaving here sad because we were unable to win. We know that we’re going to win 9 out of 10 of these types of matches.” Barça’s next game is against Levante, in the Copa del Rey, on Wednesday at 10.00 PM.