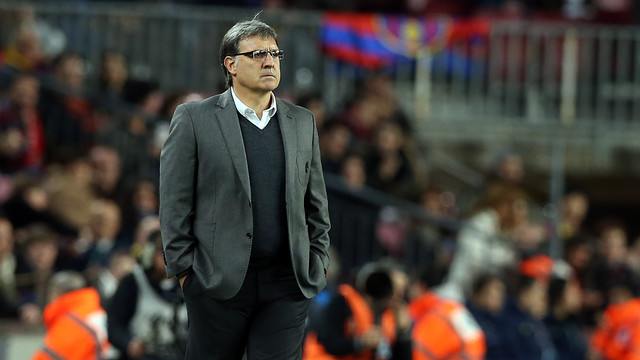 “Messi can do whatever he wants because he’s capable of doing anything. He’s very precise with his passes and he attracts the attention of our rivals,” he said

Gerardo Martino talked to the press after this evening’s 3-0 victory over Málaga. He noted that Barça “passed the ball well” and that “we created a lot of chances but we only scored three goals, we could have scored more.” Martino also placed a lot of value on tonight’s victory after Sandro Rosell stepped down as president. “The players understand that they have to talk on the field, and they did a good job after a difficult week. They showed that they are professionals.”

Messi is free to do as he pleases

“Messi can do whatever he wants because he’s capable of doing anything. He’s very precise with his passes and he attracts the attention of our rivals,” said Martino when asked about his player’s passing ability. The manager also joked that the team can score from set pieces: “Yes, once in a while we score from set pieces, it’s not too bad. I spoke with Piqué and I told him to make more runs to the near post but he scored making a run to the far post.”

When asked about the attendance at the Camp Nou (56,000), he said that the kick off times aren’t helpful. “We play a lot of matches late at night. When kick off times are a bit more normal the people will be with us,” he said, and added that Willy Caballero played a fantastic match.