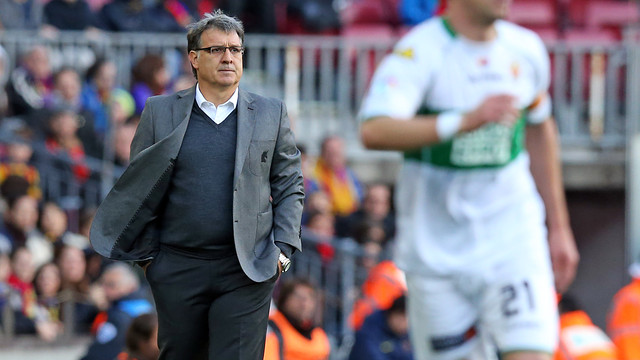 Gerardo Martino said that his team “didn’t give Elche a chance” and he added that “besides one play in the first half, we were very concentrated and we controlled the second half completely.”

The manager commented that Alexis Sánchez was named to the starting line-up because he was better prepared to play. “It was between Alexis and Neymar, Alexis was in better condition and we have to pick one of the two. We tried to figure out who was in better condition to play,” said Martino, who added that Pedro “is a player that can win any manager over. He always has answers for the team. He’s a player who can assist, he can score goals. He’s generous with his teammates. It’s hard for us to leave him on the bench.”

Martino, when asked about Cesc’s performance, said, “we have a lot of intelligent players and Cesc is one of the best at interpreting the game. He knows when he should help his teammates and he gives great passes, he always finds just the right space.” The manager then said that the team will be even better when Leo Messi is declared fit: “The best player in the world will have an impact on the team. We’ll be even better.”

Martino then praised the work done by Diego Simeone: “Atlético Madrid can win it all. They are built to do great things, it doesn’t matter who plays.” Finally, Tata said that Barça “are playing well” and that “I’m here to do my job. A couple of weeks ago I said that no one has their place secured, it’s not in the hands of the managers to stay on at a team.”