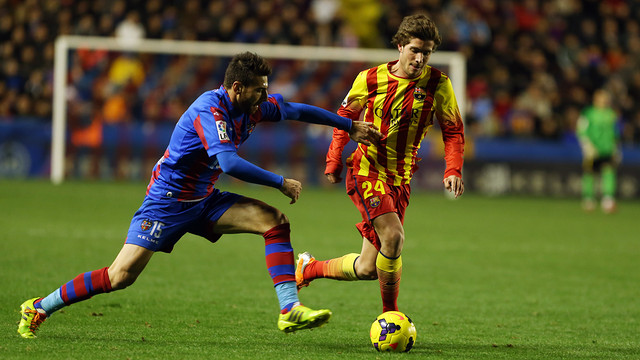 FC Barcelona will visit the Ciutat de Valencia this Wednesday (10.00 PM CET, Antena 3) after featuring against Levante in the league on Sunday. The Blaugrana return to scene where they drew 1-1 with the Valencia-based side, but tonight, however, Tata Martino’s men will try to get a good result ahead of the second leg of the Cup tie at the Camp Nou.

Alves and Puyol return to the team

The FC Barcelona manager named 18 players to the team for tonight’s match. Dani Alves, who missed this weekend’s game against Levante due to suspension, and Carles Puyol made the team. Martín Montoya, Gerard Piqué, Isaac Cuenca, Iniesta, Neymar Jr, Dos Santos, Afellay and Oier did not make the team. Martino will most likely send out a radically different team this evening to the one he fielded on Sunday.

The Valencia-based team are also expected to make rotations this evening. Joaquín Caparrós left David Navarro, Gomis, Héctor Rodas, Babá, Rubén García, Ivanschitz, Chris, Diop and Simao out of the team. Levante will try to get another surprise result at the Ciutat de Valencia, but a 1-1 scoreline isn’t the best result in the first leg of a Cup tie.