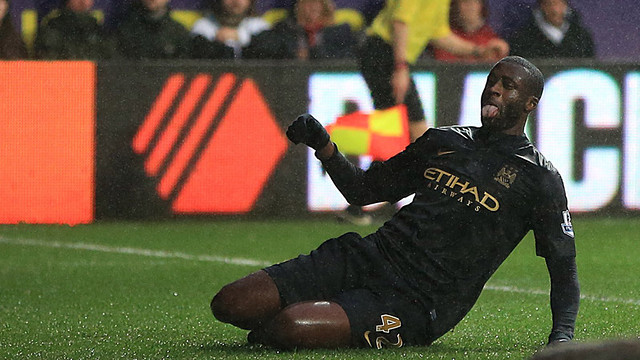 Goals from Fernandinho, Touré and Kolarov make it five wins on the bounce for Pellegrini’s players

Manchester City, who await FC Barcelona in the next round of the Champions League, have made the ideal start to 2014 with a 2-3 win away to Swansea to record their fifth straight Premier League victory.  Wednesday’s match brings the curtain down on a perfect Christmas for Pellegrini with wins against Liverpool and Crystal Palace as well as Swansea.  Fernandinho, Touré and Kolarov were today’s goal heroes.

City soon threatened the Swansea goal as Zabaleta and Navas penetrated down the right to provide crosses for Negredo and Dzeko.   The visitors took the lead in the 14th minute through Fernandinho, the Brazilian midfielder hitting his third of the league season beyond Swansea keeper Gerhard Tremmel.

Swansea kept up the pressure and finally drew level in first half stoppage time thanks to a headed goal from Wilfred Bony.  The Ivory Coast international appeared to be slightly offside but the 1-1 half time score line did justice to both sides.

Touré and Kolarov make the difference

The individual class of Touré and Kolarov tilted the match firmly in City’s favour in the second half.  Former Camp Nou favourite Touré pounced to beat Tremmel with a deflected shot in the 57th minute.  Just eight minutes later the Serbian stole the ball in his own half and ran half the pitch before cutting inside to score City’s third with his right foot.

Bony did a repeat of the first half and got one back just before the final whistle but it wasn’t enough to stop Man City celebrating a great start to 2014.  Their next league match is at home to Newcastle on the 12th.