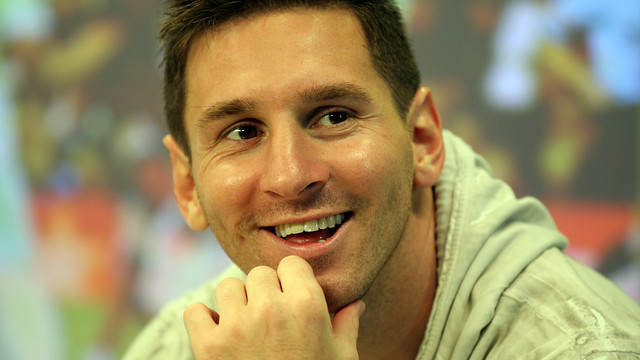 Leo Messi couldn’t have asked for a better return to competitive play than the one he got last night against Getafe. After last night’s match he was interviewed on Barça TV’s El Marcador. The Argentinian talked about his return, he explained his thought process during his two-month recovery and he opened up about his future. On the latter point, Barça’s No10 said, “I want to retire here. While people want me, I want to spend my whole career at FC Barcelona.”[[CITA_1]]

If you had asked Messi what the one thing he wanted during the last two months, he would have one answer. “What I wanted was to return to the pitch and play. I was very eager to return,” said Messi. “My excitement [to play] is always there but it is true that these past two months have been difficult.” However, he noted that “mentally I’m rested. I’m happy, very excited and very eager to achieve things.” In addition, he said that “I’m here to add to the team, to help the team achieve its goals. Very difficult months are ahead but we will fight like we always have at this Club.”[[CITA_2]]

Messi explained that he was playing with discomfort before he picked up the injury against PSG last year. “I had become accustomed to playing with pain but now I feel good physically. I played without pain.” He added: “once I had recovered completely from my injury, I worked hard to get back in shape so that I could play without pain and feel good on the pitch.”

The player then went on to praise his teammates for how well they performed in his absence. “They have shown that they are great and that all of us are important. Regardless of who plays, we do well. This team responds.”

Finally, Messi confirmed that he’ll be in Zurich on Monday of the Ballon d’Or gala. “It’s a really beautiful acknowledgment because of what it represents – it’s not a big deal if I lose.”

I want to retire here. While people want me, I want to spend my whole career at FC Barcelona
I’m here to add to the team, to help the team achieve its goals. Very difficult months are ahead but we will fight like we always have at the Club
We use cookies to ensure that we give you the best experience on our website. If you continue to use this site we will assume that you are happy with it.Ok