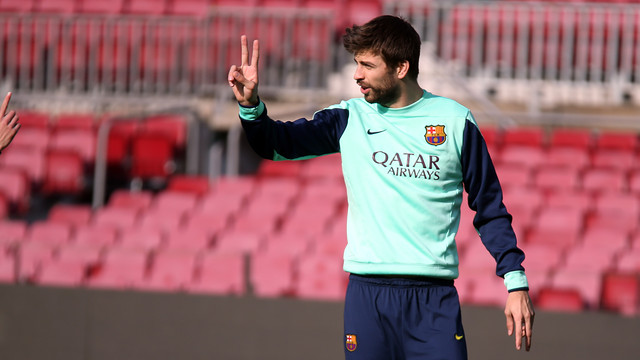 The 18 players selected for tonight’s match, plus Afellay, Bartra, Alves, and Bañuz, from the B Team, exercised at the Camp Nou

Neymar is out due to gastroenteritis, and Xavi has taken his place in the squad

Ten hours before kick-off in the Copa del Rey match against Getafe, FC Barcelona carried out their last training session in preparation for the game.  Barça exercised at the Camp Nou, as is normal for home games. The 18 players selected by Tata Martino, as well as Afellay, Bartra, Alves, and the Barça B goalkeeper Miguel Bañuz, took part in the session.

Neymar Jr. was unable to take part, as he is suffering from gastroenteritis and will be missing from the Cup game against Getafe. For that reason Martino called up Xavi, who in principal was being rested for the match.

Following the session the squad made their way to the Hotel Princesa Sofia, where they’ll eat and rest until the evening, when they’ll return to the Stadium. The FC Barcelona v Getafe match kicks off at 22.00 tonight.