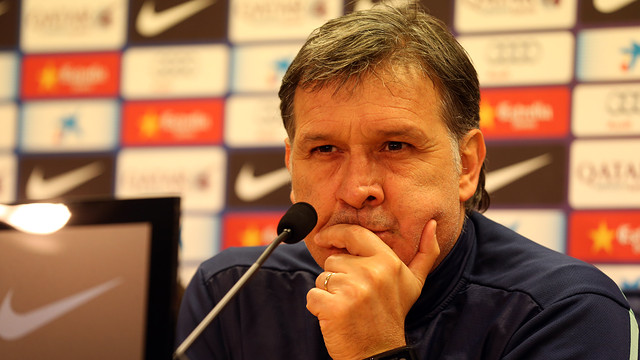 Gerardo Martino says of the Levante clash: “I don’t expect a repeat of the first match”

Martino believes that the 7-0 thrashing handed out on the opening day of the season does not reflect Levante’s true standard: “They’ve proved themselves to be a solid and combative team”.

With three games in ten days against the Valencia outfit, Martino insists that “nobody should think the matches will be similar”.

Sunday’s match against Levante (kick-off 7 pm, GolT and Canal + Liga) takes on added significance because of the Cup tie involving the two clubs.

On the one hand, the 7-0 dismantling of Levante in the Camp Nou at the beginning of the season suggests that Barça fans will be pretty confident about tomorrow’s game, but manager Gerardo Martino remains cautious. “I believe that game wasn’t typical, especially looking at what Levante have done since then. They’ve proved themselves to be a solid and combative team, fast on the break and good in defence.  They haven’t conceded as many goals against any opponent since then.  I don’t expect a repeat of that match”.[[CITA_1]]On the other, there’s a two-leg Cup tie coming up, making it three meetings in ten days.  “We’ll be sick of the sight of each other because nobody should think the matches will be similar.  A good example is Villarreal v Real Sociedad”.  Villarreal beat Real Sociedad 5-1 in the league on Monday but were knocked out of the Cup by the Basques on Thursday losing 0-1.  According to Martino, the proximity of two matches against the same opponent didn’t mean anything.[[CITA_2]]As for his latest squad list, Martino explained why Puyol and Iniesta hadn’t been included.  The veteran defender is being rested: “It’s not that I think he can’t play two games on the bounce, but neither do I see the need to take any risks.  While we can pace him this way, it’s better for the team and for him”.

Meanwhile, he revealed that Iniesta is close to full fitness: “He’s more or less training as normal.  Probably, if we were playing a vital match or a final, he might have played.  We thought it was best if he trained a bit more before a match”.[[CITA_3]]Martino also commented on the tight race at the top of the league table and looked ahead to the second half of the season: “I think things will stay the same.  We may be looking at a league championship in which 100 points aren’t enough.  It’s all about not losing the momentum that the other two leading teams have”.

We’ll be sick of the sight of each other because nobody should think the matches will be similar
Iniesta is more or less training as normal. Probably, if we were playing a final, he might have played
I think things will stay the same. We may be looking at a league championship in which 100 points aren’t enough.
We use cookies to ensure that we give you the best experience on our website. If you continue to use this site we will assume that you are happy with it.Ok