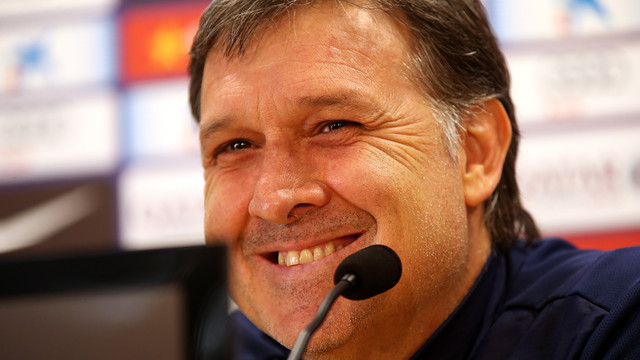 The FC Barcelona manager has noticed changes for the better at Valencia, and expects a tough match on Saturday

With all three front runners facing difficult games, he suspects that this could be an important weekend for the league

Saturday’s  visitors to the Camp Nou are Valencia, who have not won any of their last five league matches. However, Gerardo Martino feels that “the Valencia team has unquestionably changed for the better. They had a good cup tie with Atlético Madrid and played well against Malaga. They are going from less to more.”[[CITA_1]]Currently tenth in the table, this has been a week of many changes at Valencia. Guardado, Pabón and Postiga have all left, and the club has signed striker Vargas and former FCB man Keita, who has not been named in the squad. And as Martino told his Friday press conferences, all of this means it is difficult to know to expect on Saturday afternoon.

Looking more generally at the league situation, the Barça manager feels there might be a surprise or two coming up. “It is a very important weekend” he said. “All three top teams have difficult matches.” As well as Barça entertaining Valencia, Sunday brings Atlético Madrid v Real Sociedad and Athletic Bilbao v Real Madrid.[[CITA_2]]And all three teams have cup semi-finals to think about too. “We’re facing a very difficult team, and we’ll need be on our best form”, said Martino about Real Sociedad. And as for the Madrid derby in the other semi, the Argentinian commented that “games like those are mentally and physically draining, but both teams are ready to cope with a tie like that”.

Martino ended by saying that “it´s now February, and from here on every mistake will be very costly.”

Valencia had a good cup tie with Atlético Madrid and played well against Malaga
it´s now February, and from here on every mistake will be very costly