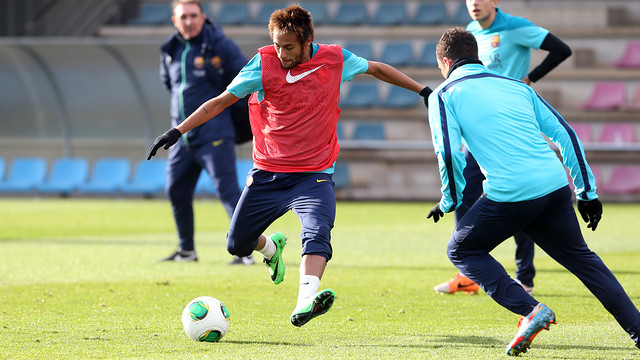 The first team squad trained at the Ciutat Esportiva this morning, with Iniesta working apart and Piqué doing some specific recovery work.

Bañuz, Nieto, Joan Roman and Babunski from Barça B and Onana, from the Youth A side also trained under Tata Martino

The squad trained in their new training kit this morning.

After enjoying a day off on Sunday, the first team squad were back in training at the Ciutat Esportiva this morninig, as Tata Martino began to prepare for Thursday’s Spanish Cup game against Getafe. The boss trained with aful squad, except for Gerard Piqué and Andrés Iniesta – the defender doing some specific recovery work and Iniesta training apart after the knock he picked up at the Vicente Calderon on Saturday night.

Barça B youngsters Bañuz, Dani Nieto, Joan Roman and Babunski, as well as Onana from the Youth A team, also took part in the session.

The squad will train again on Tuesday, at six in the evening at the Ciutat Esportiva.