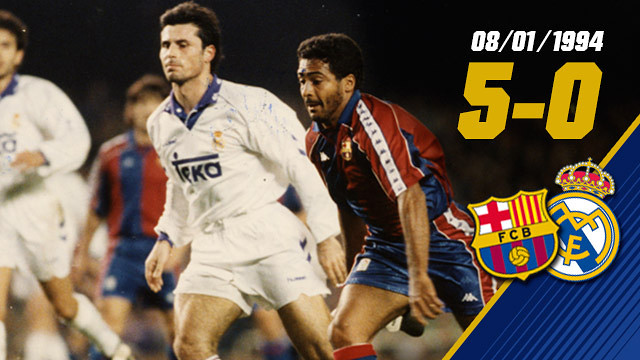 The goals on that unforgettable night were scored by Romario (3), Koeman and Iván Iglesias

January 8 is the 20th anniversary of the Dream Team’s famous 5-0 demolition job of Real Madrid. The goals from Romario (3), Koeman and Iván Iglesias produced a scoreline that would not be matched for another 17 years.

The image of that magnificent Barça v Madrid was the magnificent goal scored by Romario in the 24th minute, spectacularly dragging the ball with him as he turned Alkorta and stuck home the first goal of the night.

The second half sent the Camp Nou into a frenzy. A 47th minute free kick from Koeman made it 2-0 and then Romario got the third and fourth. With four minutes to go, Iván Iglesias got the goal that completed what is known locally as a ‘manita’ (little hand), with the five fingers indicating each of the goals. The result put Barça four points clear of Madrid, although it was Deportivo who topped the table, as they would do until the very last day, when Barça finally overtook them to take the title.