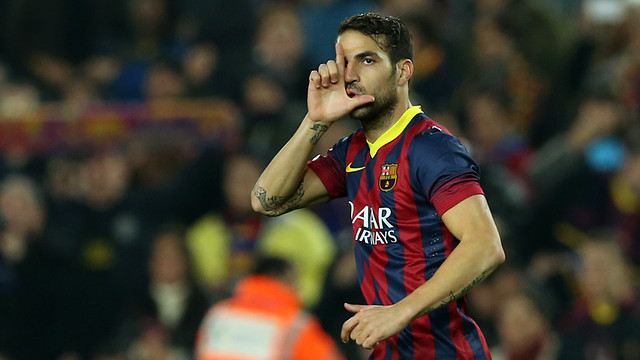 “Martino is an intelligent and flexible manager. He speaks to the players and he always wants to know our opinions”, says Fàbregas

Cesc Fàbregas said this Friday that Barça shouldn’t be obsessed with the Champions League tie against Manchester City because “we have a lot of important league and Cup matches before that and these matches must take priority.” The Catalan midfielder also talked about Leo Messi and Neymar, who will be out of action for three to four weeks.

In addition, the midfielder pointed out that Barça are entering the crucial stretch of the season, the weeks that decide whether or not a team will win titles at the end of the year: “The most important part of the season is here, with the Cup, the league and later the Champions League. It looks like the end of the season is going to be very exciting and we must maintain and improve our level of play.” When asked to give his opinion on Tata Martino, Cesc said that “he’s an intelligent and flexible manager. He speaks to many of the players and he always wants to know our opinions.”

“Messi did what he had to do. He recovered calmly, without rushing it; he’s very eager. He’s already scored goals and some of them are ones that only he can score. The fans are very happy that he’s back,” said Cesc, who added that the distribution of playing time “has been managed well and Messi is feeling good.”

On Neymar, Cesc said that “I hope he recovers as soon as possible. His absence is very important for us. Let’s see if he can make it to the Manchester City match.”