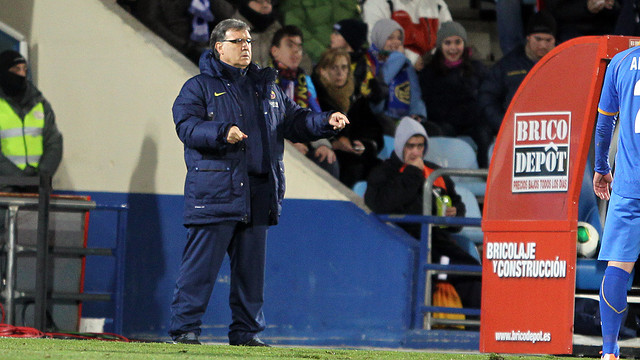 “We had a convincing win and we were able to use players who don’t usually get time on the pitch,” says Martino

Gerardo Martino said that his team were “intense” in the match against Getafe and that “with the exception of the play that Pinto saved, I think we didn’t give Getafe a chance to get back into the tie. It was over after Messi scored.”

The manager, who varied his starting line-up by nine players with respect to the team he sent out against Atlético Madrid, said that “it was matter of time for Messi to play the full 90 minutes. Little by little he’s been feeling better. He needs to get playing time after being out of action for 60 days.” Martino also said that “we had a convincing win and we were able to use players who don’t usually get time on the pitch.”

When asked about Puyol and Sergi Roberto’s performances, Martino said that the captain “has always looked good since he was given the medical all clear. He’s always responded positively when he’s played. He feels good, he’s a guarantee.” On the midfielder, Tata Martino said, “he’s taken one more step. He was a bit more risky today and that’s what I need from him, he’s a great footballer.”

Finally, Martino said that Tello “played a good match” and he congratulated Xavi on his 700th official appearance for the team. “To play 700 matches with Barça is not normal. His play is simple, very intelligent and while he feels good he’ll keep on doing it.”