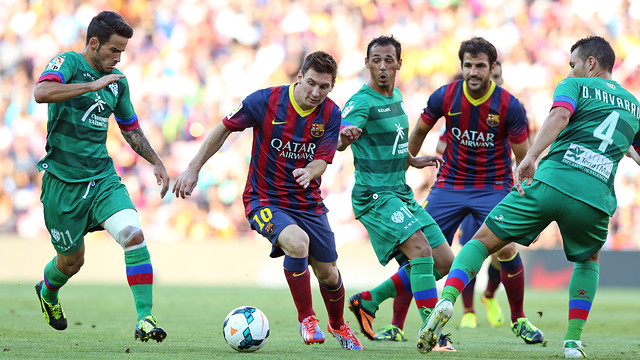 10.00 PM CET, Antena 3: Barça once again take on Levante after the 1-4 from the first leg of the Cup quarter-final tie

Iniesta, Puyol, Song and Montoya are back in the squad, while Xavi, Busquets and Alves didn’t make the team

FC Barcelona will host Levante this evening for the second leg of the Copa del Rey quarter-final. It will be the third showdown between to two sides in ten days. The first two were at the Ciutat de Valencia, once in the league (1-1) and once in the Cup (1-4).

If Barça make good on the result from the first leg, it will be the team’s seventh semi-final Cup berth in eight years (they were eliminated in the quarter-final round in 2010).

Throughout the competition Tata Martino has had a policy of rotating players into the starting team for Cup matches, and it doesn’t look like there will be an exception tonight. Xavi, Busquets and Alves didn’t make the squad, neither did Neymar, Dos Santos and Oier (all injured). Puyol, Iniesta, Song and Montoya, however, will suit up this evening.

Levante travel with many of their starters

It will be difficult for Levante seeing that no team have ever fought back from a 1-4 deficit in the history of the competition.