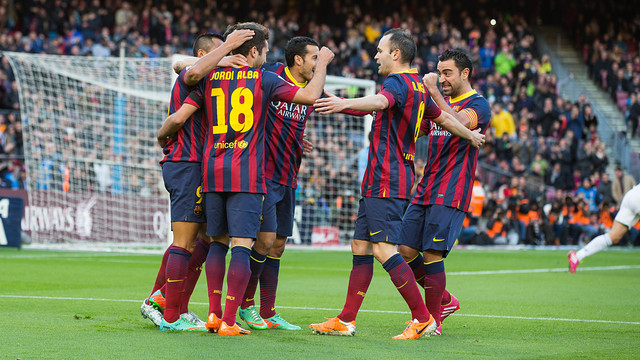 After the 1-4 victory over Levante at the Ciutat de Valencia on Wednesday, Barça are very close to securing their seventh Copa del Rey semi-final berth in eight years. In the Champions League the Blaugrana have qualified for the penultimate round for six consecutive years, and that holds true in the Cup as well.

No team have ever fought back from a 1-4 deficit

History is clear: no team in the history of the Copa del Rey have ever battled back from a 1-4 deficit, there are a total of 55 precedents. Barça went on to win the Cup in 2009 and 2012, they were eliminated from the competition in 2010 when they were defeated by Sevilla in the quarter-finals.

The most recent precedent, ten years ago

The most recent Cup tie between Barça and Levante was played in the 2003/04 season. Ten seasons ago, the men managed by Frank Rijkaard fought back at the Camp Nou from the first leg’s 1-0 result. Iniesta, Ronaldinho and Saviola got on the scoresheet (3-1).

If Barça progress to the semi-finals, they could face Real Sociedad, who defeated Racing by 3-1 in the first leg of their Cup tie.