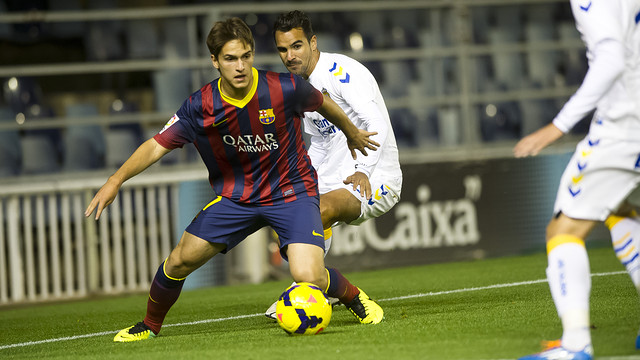 Denis Suárez explained that “the best and most crucial player for Manchester City is David Silva.” The Canary Islander, along with Iniesta, are two of the the players that Suárez looks up to: “I try to study them. They are two players that I like a lot and hopefully one day I can be half as good as they are.”

The knock out round of the Champions League against Manchester City is circled in red on FC Barcelona’s calendar. The two games will be especially poignant for a player who recently joined the Catalan team: Denis Suárez. The player, who arrived to Barça B this summer from Manchester City’s youth team, said, “I really like this tie, it will be very open and I’ll see my old friends.”

Suárez went on to explain that “Barça are slightly favoured” to go through to the next round because “the second game is at the Camp Nou, and if Barça play their brand of football it will be complicated for Manchester City.” However, “the match in Manchester will be very difficult for Barça because City, at home, are very strong.”

The Barça B midfielder is aware of Manchester City’s desire to win the ultimate club tile. “They are a team that are not used to playing in the Champions League, but they have signed an experienced manager (Manuel Pellegrini), and they have fantastic players who have never won the tournament. They are very eager to win it,” said Suárez. That’s why the midfielder believes that “City won’t have any pressure in either match because they have more to gain than they have to lose.”