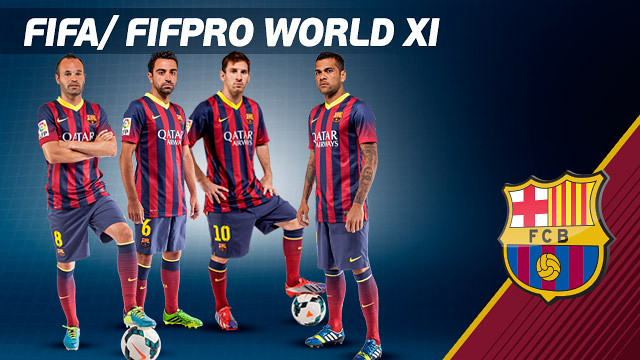 There were 9 Barça players among the 55 finalists

Dani Alves, Xavi Hernández, Andrés Iniesta and Leo Messi are the four FC Barcelona players named to the 2013 FIFA/FIFPro World XI. It’s worth noting that the nominees to the team are firstly selected by more than 50,000 professional footballers, then a public vote determines the all-star team.

Of the four Barça players named to the team, only Andrés Iniesta was not able to attend the Gala. After he picked up a knock to his right knee on Saturday, the midfielder focused on his recovery at the Ciutat Esportiva this morning.

It’s worth noting that FC Barcelona had a total of 9 footballers among the 55 nominees. Víctor Valdés, Jordi Alba, Gerard Piqué, Sergio Busquets and Neymar Jr were not name to the FIFA/FIFPro World XI.