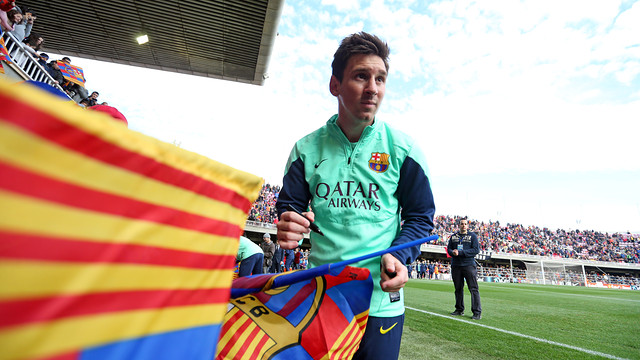 Today was the day of the traditional open doors training session in the Miniestadi, which as usual was a resounding success

Messi, who scored a hat-trick in the practice match, was one of the main attractions of a session watched by an astonishing 13,200 spectators in the Miniestadi

The festive season brings with it a number of traditions. In Catalonia, these include all the usual carol singing, decorated trees and family gatherings, plus other traditions more unique to the region, such as the three kings bringing gifts, the smashing open of an anthropomorphized log called the ‘caga tió’ and perhaps the most bizarre of all, a defecating figurine called the ‘caganer’, who candidly goes about his business in the background of nativity scenes. But in recent years, a brand new tradition has been added to the local calendar at this time of year, the open-doors training session offered by the FC Barcelona first team following their return from the Christmas break. Most especially, it’s a special day on which the young and the not so young get the chance to see their heroes close up.

There were 13,200 spectators in the Miniestadi this morning to enjoy what is always a wonderful occasion. But one man who was missing was Carles Puyol, who has gone down with gastroenteritis, as was Dani Alves, who has apparently recovered from the fever he was suffering yesterday, but was told that he’d be better off doing specific exercises in the Camp Nou gym. One player who was unexpectedly in attendance was Barça B’s Bagnack.

Cheers for Messi and Neymar

It had just gone 11.00 when the players and coaches took to the field. After saluting the thousands of fans in the terraces, they got down to work, starting with a warm-up lap, then doing some stretching and doing the usual drills before taking a short drinks break and getting ready for the 9-a-side practice match. The goals in that game 1were celebrated by the fans as if they had been scored in an official game, with Messi showing that he has returned in fine shape from Argentina by scoring three goals for his team. Neymar was also in good form, and could have scored one of the best goals of the day, but despite rounding Pinto in style, his angled finish missed the target, and Messi was just too late to knock the ball in at the far post.

The party atmosphere in the Miniestadi continued with a lap of honour and with the players kicking balls into the crowd. And then the greatest gift of all for so many of those present was the chance to speak to their heroes and take their photographs or get their autographs. The players made a point of dedicating special attention to the group of disabled supporters in one area of the ground.

When it was all over, Javier Mascherano and Cesc Fàbregas both attended to the Barça TV microphones to give their impressions of the day. The Argentinian spoke of “a very special day, it’s the only chance all season we get to share a training session with the fans”. Cesc agreed, speaking of “a special day when all Barça fans should be united, help each other and enjoy spending some time together”. The two players also took the opportunity to say a few words about the return to work after the short break, and especially to discuss the long-awaited return of Leo Messi. Mascherano commented that “it’s always difficult to get back into playing again. But we have all come back in fine spirit. From here on, there is no margin for error, and we have some important, decisive weeks ahead”. Cesc told the cameras that he is delighted that Messi is back, but “we shouldn’t throw all the responsibility back over to him. He needs to take things step by step”.