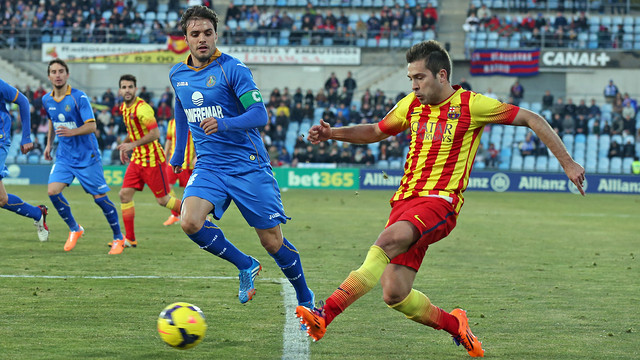 “Monday will be a very happy day for me, it’s possible for me to retire at Barça,” says Iniesta

Jordi Alba was one of the standout players in the match against Getafe as he assisted Pedro for one of the forward’s three goals. Despite the win, Alba admitted that the team didn’t get off to the best of starts: “We conceded two goals because we were relaxed, but the team reacted and we ended up playing a good game.” Barça secured the top spot in the league for the rest of 2013 thanks to the victory at the Coliseum Alfonso Pérez this afternoon, a fact that pleases Jordi Alba: “In general we played a good game. We’re happy that we ended the year as league leaders, we got an important victory.”

Andrés Iniesta will sign his new contract on Monday. The footballer said that it will be a happy day for him: “It will be a good day, it’s possible for me to retire at Barça. I hope to stay healthy and help the team win titles at the end of the season.” Iniesta added: “We’re confident. Next year we have to follow the same path and get to April and May in a position to fight for all the titles.”