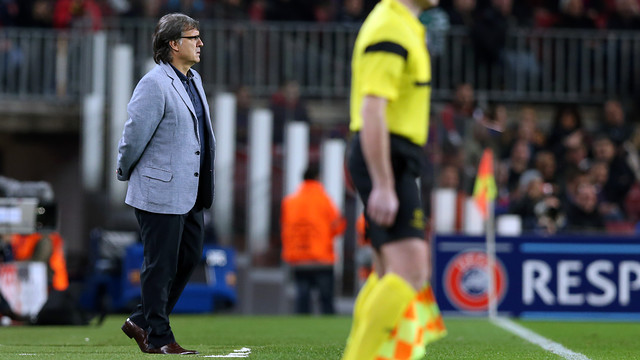 “There was good pressure, intensity and we played well,” says the manager after the match against Celtic FC

Zubizarreta: “We are growing”

Andoni Zubizarreta analysed Barça’s victory over Celtic: “We’re growing in our play. We’re missing players like Messi and Valdés, but despite that the team have the same intention of dominating when they play.” When asked about possible rivals in the next round of the competition, he said he had no preference. “It’s a tie that’s a bit tricky because the draw is in December but you don’t play until February. A lot can happen in that time.”

Tata Martino told the gathered journalists in the Richard Maxenchs press room that his team played one of the best matches of the season this evening. “It was one of the most complete games we’ve played. There was good pressure, intensity and we played well.” In addition, the manager said that he’s satisfied because the team played well “throughout the 90 minutes of play.”

Martino then praised his Brazilian forward, Neymar Jr. “He needed a couple of minutes to adapt from his position on the wing to the center. The goal gave him confidence and from there he showed his repertoire.” The manager added that “I’m amazed at his level of commitment to the team, it’s strange in players that are as good as him.”
[[CITA_1]]
He also highlighted Alexis’ performance. “He was one of the best this evening. He’s shown that you don’t have to score to play well.” And he also had words for Sergi Roberto: “He’s played very well in two games and I think that he can be even more decisive. My view of him has nothing to do with how many minutes he gets on the pitch.”

When asked Barça’s possible rivals in the next round of the competition, Martino said that he didn’t have any preferences. “There will be time to get to know our rival.”

It was one of the most complete games we’ve played. There was good pressure, intensity and we played well