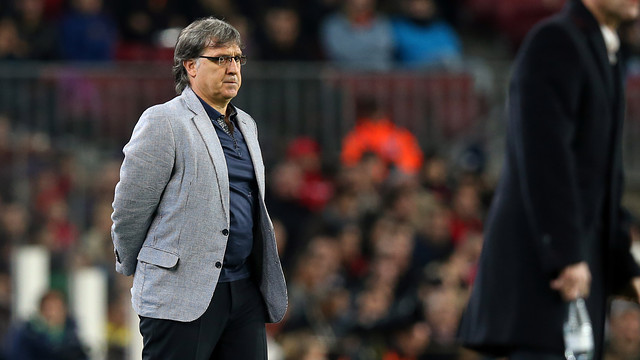 The Argentinian manager congratulated his players for this evening’s victory against Villarreal: “the attitude of the whole team is what’s noteworthy from the match”

Gerardo ‘Tata’ Martino talked to the press after this evening’s hard-fought match between FC Barcelona and Villarreal (2-1). The Argentinian started off by saying that “this is the match that has made me the most happy since I’ve been at Barça,” and he highlighted the importance of the victory particularly “because of the way we played and because of the quality of our rival.” When pressed to expand on his analysis of Barça’s high pressure, he said, “it all depends on our desire to do it, and today the team was very conscientious in this regard.”

Martino then justified playing Alex Song ahead of Sergio Busquets on the pitch: “I moved him father up the pitch because we believed that Villarreal would play with two forwards, when they equalised we had to correct our plan.” Additionally, Neymar Jr once again played out wide while Cesc took up the role of false 9. “Their performance isn’t dependent on whether they score or not,” and he noted that Cesc “was decisive in the second goal.”

The bad news from this evening’s match was that Barça were unable to keep a clean sheet. Musacchio’s goal came from a corner kick, but Tata Martino said that “the merit belongs to Villarreal, it wasn’t a defensive error on our part.”

The Argentinian manager insisted that Barça are on good form after defeating Celtic and Villarreal this week. “We’re doing very well, it’s a shame that the Christmas break is so close,” he explained. He also said that “the three points improves the morale of the players, but what gives me a boost is the sacrifice these players make on a daily basis.”