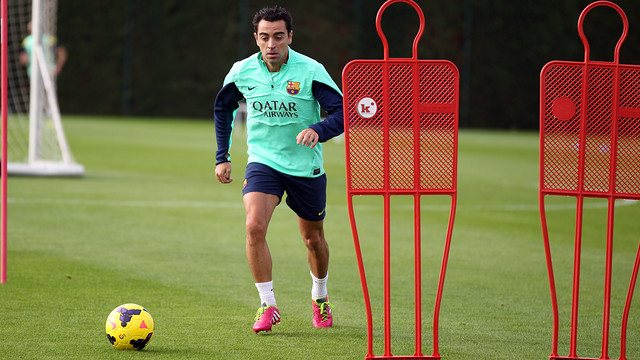 Andrés Iniesta, who exercised alone on Monday, also trained with the squad

The FC Barcelona squad trained for the last time in 2013 in a session involving the same faces as on Monday (Valdés, Pinto, Puyol, Xavi, Pedro and Afellay, who joined part of the workout) as well as those that appeared in the Catalonia v Cape Verde match (Montoya, Bartra, Piqué, Alba, Busquets, Cesc, Sergi Roberto and Tello).

Andrés Iniesta also rejoined the squad after exercising alone on Monday, as did Adriano Correia, who was allowed to arrive a little later after playing in last night’s ‘Champions for Life’ charity match in Madrid. That meant that Tata Martino had a total of 16 players under his orders on Tuesday morning.

The players that have travelled outside of Spain for their Christmas break have been allowed to prolong their absence until January 2. The players have been given New Years Day off, and will then start preparing in earnest for Sunday’s league fixture against Elche at the Camp Nou (16.00).