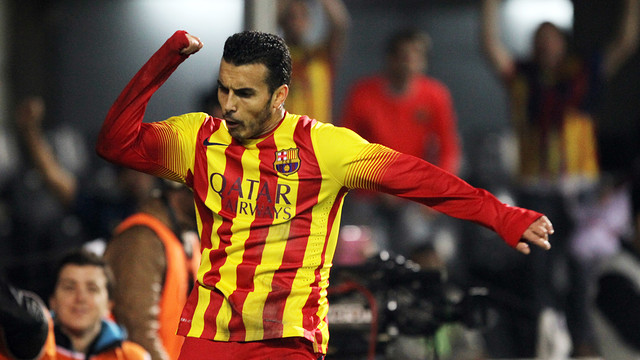 FC Barcelona have got their cup campaign off to a fine start. Despite going behind to a surprise early goal, they had FC Cartagena under absolute control and had worked their way back into the lead by half-time. They finished off the job with two more after the break. The many positives to take from this game included Jean Marie Dongou not only making his debut but also scoring his first goal for the first team, and Jordi Alba returning from injury to play 80 untroubled minutes.

The game was lively from the outset. Barça immediately started creating chances, but FC Cartagena clearly wanted to make the most of the occasion and enjoyed a few close calls of their own. And then in the 16th minute, Fernando broke free into space and beat Pinto in the one-on-one to fire his team into an unexpected lead.

The goal naturally sparked off a party atmosphere in the Cartagonova Stadium, but it merely served to fire Barça up even more. The Catalans started piling on the pressure as the home side desperately did all they could to hold onto their lead. Pedro was causing the Division 2B side all kinds of trouble down the left, and was brought down twice on the edge of the penalty area (arguably inside it on of the two occasions) and both free-kicks missed by only a whisker. But the Canary Islander finally found the net when meeting a perfect through ball from Cesc and making no mistake with the delivery.

The goal knocked the wind out of the Murcians. Following a couple of strikes from Alexis, Cesc banged home a cross from Adriano to put Barça into a deserved lead.

Barça simply smothered FC Cartagena out of the game in the second half, and the only real question was how many more goals they would be able to score. Chance after chance fell to the Liga leaders, and it was amazing that it took them so long to get goal number three. Cesc and Jordi Alba both came close, and then Alexis sent an absolute sitter flying skyward, but just moments later the Chilean was able to make amends by providing the assist for Pedro to find the net for the second time of the night.

With Barça well in command, Martino opted to take off Alexis and send on Jean Marie Dongou for his first official appearance for the first team. The 18 year old Cameroonian impressed from the moment he stepped onto the field, and only took eleven minutes to get his name on the scoresheet. Pedro struck the ball onto the post, and there was Dongou to convert the rebound. It all ended 4-1. Barça finally achieved that elusive first win in their yellow and red away strip, and at the same time, already have a foot and a half in the second round of the Copa del Rey.