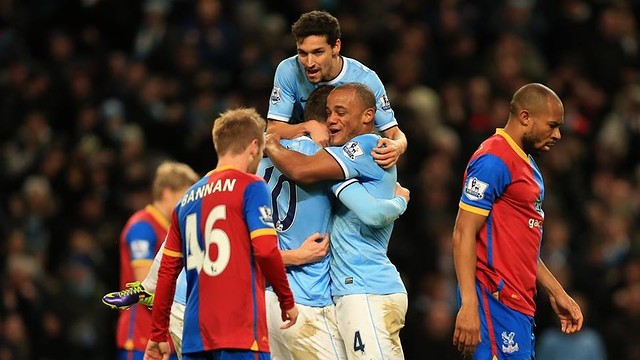 Barça’s rival in the Champions League closed out 2013 with a hard-fought victory against Crystal Palace (1-0). The Citizens dominated the match from the start but they were unable to break through the visiting team’s defence until the second half. Manchester City are now the Premier League leaders (Arsenal are set to play this Sunday).

Close but no cigar

Despite missing Agüero and Yaya Touré, among others, Pellegrini’s men controlled the match. But their dominance didn’t translate to goals given Crystal Palace’s organised defence.

The visitors, despite not creating a lot of chances, threatened the goal defended by Joe Hart. Manchester City’s keeper played an exceptional match as his efforts kept Crystal Palace off the board.

On the 65th minute, Nasri crossed the ball into the area where it was received by Navas, who laid it off for Dzeko. The forward fired to the back of the net, and thus secured the three point for Manchester City.